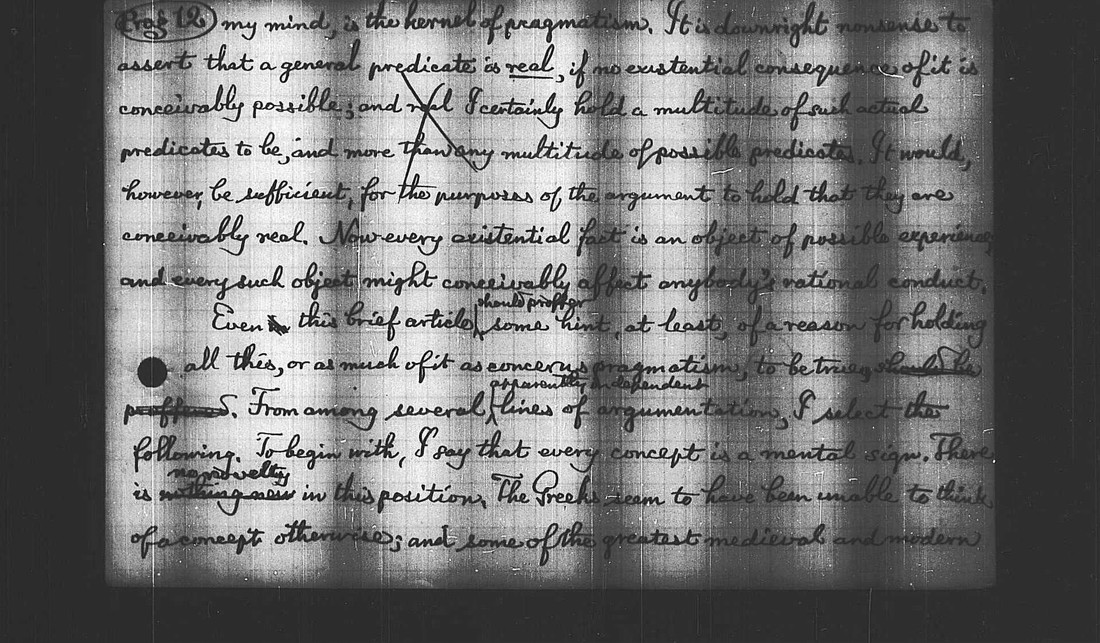 An article in the form of a letter to the editor of The Nation was published as follows: 5.11-13 (pp. 1-7) 5.464-496 (pp. 7-45 of one draft and pp. 46-87 of another the last two sentences of 5.481 were spliced by the editors of the Collected Papers). Also published as 1.560-562 were pp. 20-27 of still another draft. Omitted from publication: an analysis of James's definition of "pragmatism" (pp. 10-13 of one of the alternative sections). James's pragmatism again, followed by a discussion of his own position the two distinct opponents of pragmatism (Absolutists and Positivistic Nominalists) pragmatism and religion law distinguished from brute fast, not, as the nominalists would have it, by being a product of the human mind, but, as the realists assert, by being a real intellectual ingredient of the universe triadic predicates as always having an intellectual basis, the evidence for which is inductive thoughts regarded as signs, with signs functioning triadically three kinds of interpretants emotional, energetic, and logical the distinction between association and suggestion the syllogism as an associative suggestion "corollarial" and "theoric" reasoning, of which an example of theoric deduction is the "Ten Point Theorem" of Van Standt (pp. 10-56 of a long draft from which pp. 20-27 were published). The three kinds of interpretants of signs ultimate intellectual interpretants pragmatism and common sense, with the meaning of critical common sense explained (pp. 43-59 of an alternative section of the long draft numbered 10-56 and described above). Kernel of pragmatism concepts equated with mental signs the object and interpretant of a sign distinguished the problem of ultimate, or "naked," meaning existential meanings the meaning of an intellectual concept qualities of feeling as meanings of signs, where qualities are neither thoughts nor existential events the distinction between real and immediate (as represented by a sign) object, with immediate objects resembling emotional meaning and real objects corresponding to existential meaning mathematical concepts as examples of logical meaning the relationship of logical meaning to desires and habits (pp. 11-34 of another alternative section). Object and interpretant (meaning) the different units of interpretants (meanings) pragmatic definition and a prediction that pragmatism will occupy the same position in philosophy as the doctrine of limits occupies in mathematics (pp. 14-25 of an alternative section of the one described immediately above). Kernel of pragmatism theory of signs by inference a sign first comes to be recognized as such the elementary modes of inference (pp. 12-30 of an alternative section). The divisions of geometry a problem in topics the Census Theorem and Listing Numbers the function of consciousness concepts and habits the vulnerability of James and Schiller arising from their (apparent) denial of infinity, including an infinite Being (pp. 62-77 of still another alternative section). An attempt to define "sign" the sense in which utterer and interpreter are essential to signs the immediate and real objects of signs a brief note on the Census Theorem (pp. 12-90, with the exception of pp. 46-87 which were published).

with no single, consecutive, complete draft, but several partial drafts end and are signed (Charles Santiago Sanders Peirce) on pp. 34, 77, and 86.